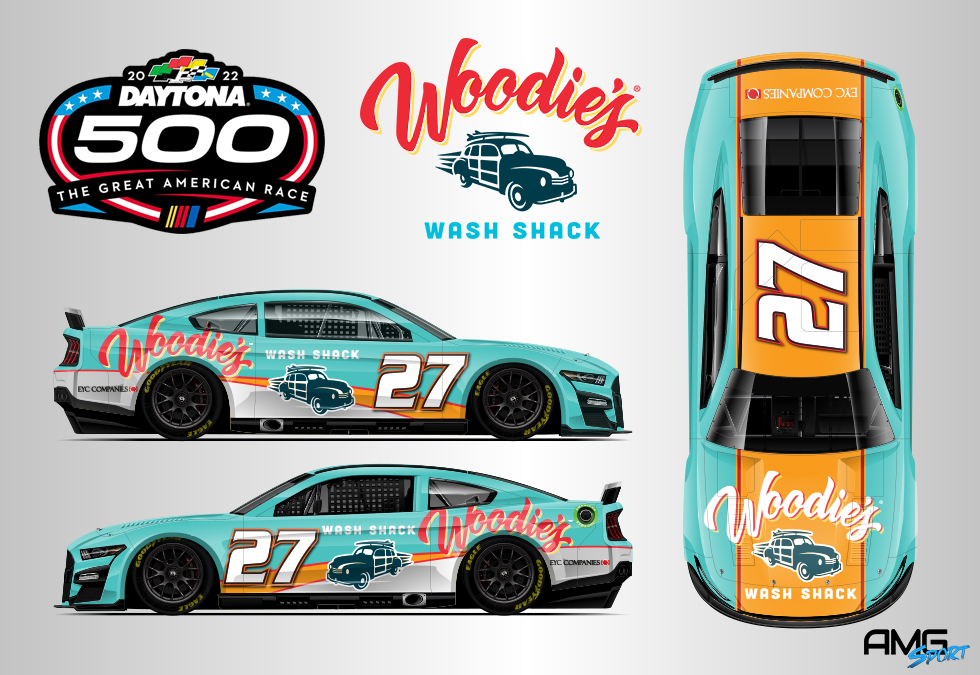 Don Phillips owner of Woodie’s Wash Shack, a family-owned business, and longtime NASCAR and IndyCar enthusiast stepped up to sponsor Jacques Villeneuve No.27 for the Great American race at the last minute.

Phillips was actually already in Daytona meeting the Allison Brothers family to purchase the Marty Robbins 1969 Daytona Charger when he received a phone call from one of his friends, AMGSport president, Charles Broadhurst.

“I really just called him to catch up, but after telling me the story of the 69 Charger, I thought what the heck and just threw it out to him,” Broadhurst said.

Phillips jumped at the opportunity to be a part of racing history, especially at the Daytona 500.

In a matter of minutes, the deal had been worked out.

“This is a lifelong dream. I love NASCAR and IndyCar. We already sponsor the St. Pete Grand Prix, so to be a part of this great story with Jacques at age 50 qualifying for the Daytona 500 is really a special moment. It’s great that a nationally recognized brand like Woodie’s has a chance to be featured during the Daytona 500, but to me, it’s about supporting the dreams of fans and racers everywhere whether you are 5 or 50” said Philips.

Josh Raume said, “I watched Jacques in F1 as a kid in Karting… to have him driving our car in the Daytona 500 is completely surreal and to have made it on time I can’t believe it.”

Jacques said, “Making the field for the Daytona 500 is a dream come true. I will add it to my special room with the Indy 500 and F1 championship. It was a big risk to come with a new small team from Europe and it paid off. Let’s go racing.”

Woodie’s prides itself on being a throwback to the surf culture of the 1960s and wants to make a difference however small or in this case big that may be.

Woodie’s mission is to make a difference in the lives of others by creating an oasis of EPIC amounts of courtesy, clean, fun, and opportunity. By providing exceptional customer service, the best technology in the industry, and a unique membership program, Woodie’s creates the best experience in the bay!